AARP Alaska spoke with the candidates to see where they stand on key issues for 50-plus voters. Here's what they had to say: 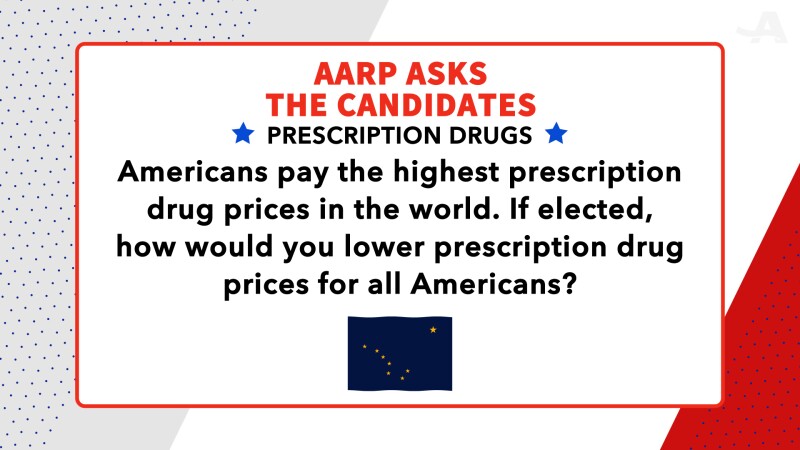 Murkowski: It is an unfortunate reality that Americans pay some of the highest prices for their pharmaceutical drugs than anywhere else in the world. And our Medicare enrollees really bear the brunt of that. So everything that we can do to lower the cost of prescription drugs is important. I have worked on the FAIR [Drug] Pricing Act, which would require pharmaceutical manufacturers to justify the cost increases that we see. I have worked in other drug pricing reduction initiatives to make sure that we are lowering the costs for all. In the Inflation Reduction Act that was just passed and enacted into law, I think it's important to know there was no one silver bullet. It is — it is good to know that we have capped the cost of insulin to Medicare users. We need to do more to cap the cost of insulin for all users. I was a supporter of that. I support the out-of-pocket caps on out-of-pocket spending, but there's more that must be done.

Chesbro: Prescription drug prices have grown exponentially in the past few years. I don't know the reason for this, but I think it's very vital that we figure out how to fix it. Fortunately, the Inflation Reduction Act is going to help Medicare recipients to pay lower prices. First of all, they're going to cap the amount that people need to spend in a year up to $2,000. Secondly, starting in 2026, they're going to negotiate better prices for the top 10 drugs and then 15 and then 20. And that's going to help Medicare patients. Unfortunately, that is not going to help everyone in America, but hopefully it will be a step forward in finding ways to lower drug prices for all Americans.

Tshibaka: I will always stand with our seniors against Big Pharma trying to drive up their drug prices. Medicare needs to be able to negotiate prescription drugs directly with the drug companies to lower the costs, and the government can help to get generic drugs to market quicker and also to safely import low-cost drugs from other countries. As senator, I can also help with nominees. President Biden just recently put an FDA commissioner in place who is in the pocket of Big Pharma. Both Joe Manchin and Bernie Sanders opposed him because they said he could not independently regulate the industry because of his ties to Big Pharma. I also would have opposed this commissioner, Robert Califf. Those are the things we can do to help keep prescription drug costs low. 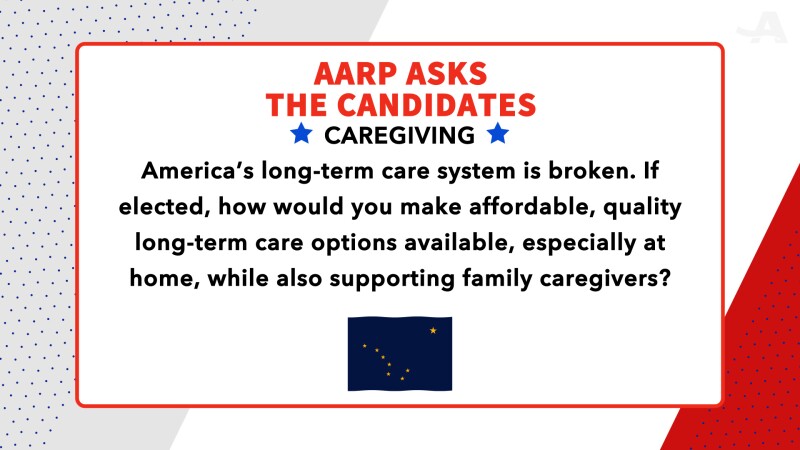 Murkowski: Our long-term care system in Alaska is broken. And so everything that we can do to allow for our elders to remain at home, to be able to choose to locate in a skilled nursing facility or at home, these are the options that we want to be able to provide. So I have helped by cosponsoring the Choose Home Care Act, which will allow for individuals to exactly make that selection. We've been focused on bipartisan legislation, working with our colleagues from Hawaii to address the high cost of living and the high cost of care in states like Alaska and Hawaii. So everything that we can be doing to reduce the higher costs that we face in Alaska, this is what will allow for greater access to long-term care for those that we love.

Chesbro: We need a variety of levels of caregiving in our country. Long-term care might mean being in a community setting, but it very often means at home. And we have to make sure that we advocate for the proper level that people need. I know a friend who is in an assisted living place that actually gives her too much care, more care than she needs, but there are not very many options for the kind of level of care she needs. It's very vital, no matter what, when we have home health care, which we need to have more workers in home health care, but it's also a burden, maybe a joyful burden, but a burden on the family members that take care of the person. And we need to advocate for them as well as advocate for the person for whom we are offering care. This is a long-term problem that needs to be looked at in many ways and solved.

Tshibaka: I've had the privilege of getting to work in a nursing home as a volunteer, and also being up close with friends who provided at-home care. And this is an area that is really close of concern to Alaskans. I would really support giving tax credits to those families that are providing at-home care. They're doing a great service for our seniors, and they're also doing a great service at helping us save costs in caregiving. I also think that we need to provide some quality control at what's happening in nursing homes, making sure we're providing the best care possible for the people we love.

3. Medicare provides critical health coverage for older Americans. If elected, how would you strengthen it for the future? 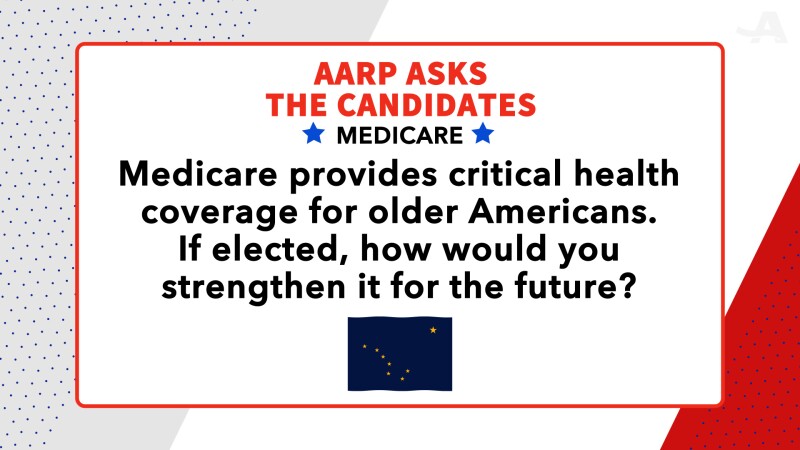 Murkowski: We need to ensure that those who are eligible for Medicare are able to access the health care. In our state, unfortunately, with the high health care costs that we have, we see reimbursement that simply doesn't allow for the level of access that is important in a high-cost state. So everything that we can do to reduce those costs, such as legislation that I've been helping to advance that would allow for greater access to Medicare recipients through telehealth. What we've done with the Medicare [Patient] Empowerment Act to allow for those who are on Medicare to be able to select a provider of their choice. It's about access and it's about working to reduce those costs through making sure that reimbursement is fair.

Chesbro: Medicare certainly does provide critical care for older Americans. It is very important to make the system sustainable, however. Right now more money is coming out of the system than into the system. And one thing we could look at is taking an existing tax, which is an unearned income tax, and devoting that to Medicare itself. Another way we could make it more sustainable is to look at the actual levels of premiums that people pay, which seem to benefit the higher earners better than the lower earners. And those systems, I think, need to be adjusted to ensure that everyone has a fair shake. Medicare is vital.We need to keep it strong.

Tshibaka: I've been really concerned with all the signs I've been seeing around Alaska with clinics and providers saying that they're not going to treat people over the age of 65 anymore. And that shows us how badly we need Medicare reform. I'd like to see more options for our seniors, like medical savings accounts and permanent telehealth coverage. And I'd like to see us give our providers not just tax deductions but tax credits for seeing Medicare patients. That would open up more providers for us. And I think that any savings that we get in the Medicare program should be given back to help our beneficiaries and not raided to go plug holes over in Obamacare. Those are all options that would help our seniors. 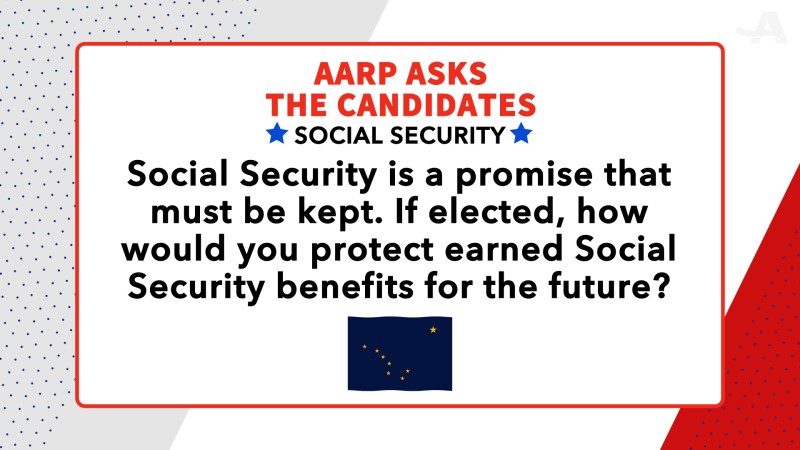 Murkowski: The first thing that we must do when it comes to Social Security is ensuring that those who have paid into this system are able to receive the benefit from Social Security. So we cannot erode that from those who are SocialSecurity recipients, we need to work to ensure solvency.And I have been doing that as a senior member in the United State Senate. One specific example of what I have been doing is trying to eliminate this unfair penalty that is really imposed on those who would change their careers, perhaps midstream. This is the Windfall Elimination Provision and the Government Pension Offset: WEP GPO. I have been the lead architect in the Senate to eliminate this penalty provision to ensure, again, that those who have paid in receive their full benefits under Social Security.

Chesbro: Social Security is a promise. And it's a very important promise.And I think as our young people age without pensions and those kinds of security, that Social Security will be even more important to that group of people. I am not for reducing benefits. I am not for increasing the age, but I am for eliminating the amount, the maximum amount that is taxed under Social Security. I think that gives a benefit to people that may not need that benefit. And I think it harms people at the lower level, and the time to act is now.