Standing center stage, Linda Smith’s face shows total concentration. Her chalked hands grab the bar and heft, then she locks shoulders, knees and hips into their required positions. Down, signals the judge’s arm, and the weight crashes to the floor.

Linda thrives on competition and loves the empowerment she gains from her sport of powerlifting. “You can do anything you want,” she says. “I believe that, but you gotta want it bad enough.” And Linda definitely wants this - badly.

Since her teen years growing up in eastern Iowa, she’s always been physically active. At first it was high school sports like track. Even when she and husband Brian had expanded their blended families with three adoptions to reach nine children in all, she still made time for workouts.  In her 50s she dug into Farrell’s extreme body shaping, becoming an instructor, and that in turn sparked a new goal: becoming a certified personal trainer.

As she worked through the trainer curriculum, she wanted a new workout regimen that allowed her to put coursework into regular practice. That’s when she connected with Drew Murphy, a personal trainer with his own strength-training center in nearby Tiffin. 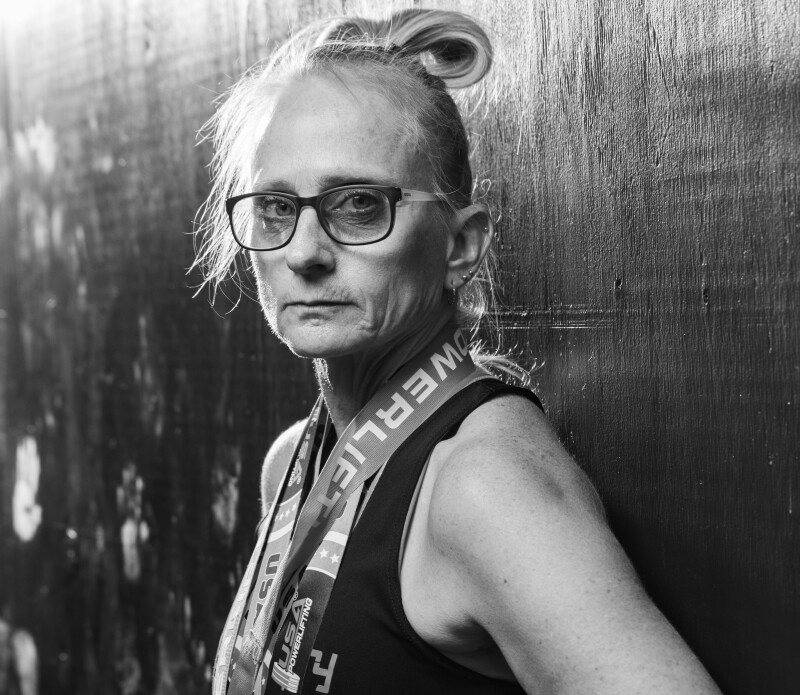 Then came 2018 when Drew mentioned on social media how much weight Linda was moving, and a friend urged her to try powerlifting. Linda decided to do it but only if Drew would coach, and together they learned how the meets worked. Four months later in Bettendorf, Linda took her first competitive shot at the squat, bench press and deadlift, required components of all powerlifting meets. “It was scary,” she recalled, but she loved it: “It was like ‘oh my gosh, that was so fun.’ I wanted to do it again.”

Linda consciously chooses to compete in events sanctioned through USA Powerlifting, which touts itself as drug-free and requires random testing. Her division is “raw” vs. “equipped”, which means it’s all Linda-power and no extra gear like bodysuits that some say give an added boost.

Husband Brian doesn’t lift weights but is a constant presence at her meets, and her sprawling family totally supports her passion. Friends are mostly encouraging, but some skeptics try to say she’s “starving herself” to maintain her 125-pound weight or that she’ll start looking like a big-muscled guy.

Linda tunes out the critics, focusing instead on the sense of community she loves among women lifters. “It’s women supporting women,” she says. “You’re cheering for each other. You want everyone to do their best, even if it’s against you.” And the women’s ranks are growing: Between 2012 and 2018, women members in USA Powerlifting rose from 21 to 35 percent.

As the name says, this sport showcases sheer power and competitors get three tries to lift their best for each of the three moves.  The lifts are controlled, not the “clean and jerk” or “snatch” seen in Olympic-style weightlifting.

Staying competition-ready takes discipline and hours of hard work each week for Linda. She wraps daily workouts around a full-time office job with a plumbing company. Her day typically starts at 5 a.m. with 1,000 reps on her home rowing machine.  After her workday ends at 3:30 p.m., she heads to Drew’s fitness center for a two-to-three-hour tailored workout.  Once home, she’ll often ride her bike attached to a trainer stand for a three-mile “cool down.” Nutritionally she strives to eat clean because as she puts it, “If you eat crappy, you feel crappy.” (After her big July meet, she did celebrate with a bacon-bacon cheeseburger!)

Mental preparation almost rivals powerlifting’s physical demands, and Drew was impressed early on by Linda’s ability to maintain that mental focus. ”You’re in your head all the time,” agrees Linda. “You can miss a lift just because you’re mentally not there.”

Her laser-focus is on full display at meets. As her name nears the top of the board, she’ll get a last-minute pep talk from Drew, but then her attention moves inward. Once she lifts, she’ll demonstrate another hallmark: fighting through to complete a move even when it might look like the weight has stalled. “You have to train yourself to continue to pull, to continue to push,” Drew explains, and he says Linda instinctively knows how to attack those heavier weights.

She constantly strives to top her numbers from previous meets. “I find it crazy I’m so weak at my bench,” she says, although “weak” is relative here as she can bench-press just shy of her own body weight. Still, the deadlift comes more naturally. She’s set several deadlift records for her age and weight class, and her July lift of just over 341 pounds shows her progress since that first Bettendorf meet when she lifted around 269.

Linda lost the official weight and class deadlifting record in June to a woman competing at USAP Nationals.  While she came charging back at her Des Moines meet with an even bigger lift, it’s not official. That’s because Des Moines had one, not the required two, nationally sanctioned judges. But she accepts the situation. “I got the results I wanted,” she says, meaning she knows she can beat the standing record. Besides, the other woman earned it fair and square and “I want to let her have it for a while because I will go back and get it again,” she says, grinning.

She doesn’t waste energy thinking about how long she’ll compete. “There are women that lift in their 70s. The sky’s the limit,” she says, especially when she has a trusted coach helping her tackle new goals. “Age is nothing but a number to her,” Drew agrees.

Eventually, Linda wants to help train young women so they, too, can experience that feeling of empowerment. She’s also interested in helping train the elderly to stay active, which she sees as key to a longer, healthier life. “If I change one person’s life, that’s great,” she says.

But for now a couple of powerlifting goals still beckon: “I want to compete at the Arnold,” referring to the Arnold Sports Festival named for bodybuilder Arnold Schwarzenegger.  She also has her eye on claiming the world deadlift record for her age and weight class.

Next Month: On a snowy night 25 years ago, our September Hidden Gem landed in Iowa from Kenya. Grateful for the help and warm welcome she received then, she’s been dedicated ever since to paying it forward. She’s donated thousands of hours to helping other newcomers or those with special needs embrace their differences and succeed. A friend jests that our Gem pulls this off by inventing 26-hour days. Discover why this 52-year Ankeny woman believes everyone should make time to volunteer.